P.i. removes stubborn deposits and keeps injectors functioning as they should. Testing shows P.i. restored GDI fuel injectors to a 100 percent flow rate after one tank of fuel.2

Fights Intake Valve Deposits Valve deposits alter or restrict airflow patterns in the cylinder. They disrupt the balanced air/fuel ratio by momentarily absorbing and releasing fuel. The deposits can also cause valve sticking by getting in the way of the valve stem and guide. 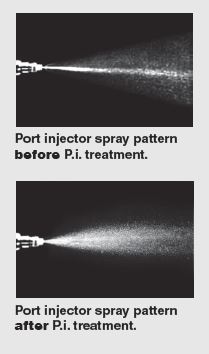 Cleans Combustion Chamber Deposits Combustion chamber deposits increase compression and absorb heat during combustion. Later, they release that heat during the intake cycle. In some engines deposits can cause the piston to actually hit the cylinder head – a process known as “carbon rap.” The deposits can also flake off and become trapped between the valves and valve seat, resulting in compression loss.

Higher compression and stored heat increase the likelihood of pre-ignition “knock” when the fuel spontaneously combusts prior to spark ignition. This increases emissions and may cause engine damage. Most vehicles have sensors that adjust spark timing to prevent knock. Although audible 'knock' is controlled, power is lost from retarded timing and engine efficiency suffers. Higher octane fuels can be used to help prevent the phenomenon. As a vehicle ages, more-expensive, higher-octane fuel is needed to keep it operating at peak performance.

P.i. works as an "emissions passer." Running one tank of treated fuel through your engine helps pass emissions tests.

Capless-Compatible Packaging Many new vehicles have replaced traditional fuel caps with capless systems. The threads on most bottles restrict them from opening the flap inside the fuel neck and also make removing the bottle difficult. The P.i. bottle is fully compatible with capless fuel systems.